While we were on holiday in Skipton, Cameron spotted a tweet from Leeds First Direct Arena advertising their open day – 2,500 tickets released for free to help them test some of their functions before the arena has its official opening very soon. We jumped straight on my laptop to order ourselves a couple, and today was the big day.

Having decided that even with only 2,500 people going, Woodhouse Lane car park would be packed, we took the train into Leeds and walked up from the station. That turned out to be a good idea, since there was an open day at Leeds University happening this morning too, and we heard that the car parks were rammed full.

We arrived at the arena about 40 minutes early, full of excitement, especially when the concourse started getting busier and they turned on the lights on the outside of the building. When we were all let in, we were allowed to wander around a bit before making our way to our seats. On the way, we stopped off to check out the facilities. Very clean (obviously), and large cubicles, but the only disappointment was the hand dryers – comparable to being breathed on by an old lady. But Cameron has since seen a tweet to say new hand dryers are on order, hopefully they’ve gone for a good old Dyson Airblade.

We were in block 105, the lowest of the available tiered seating (although there are more seats that can be pulled down below), and bang slap in the middle. Because there were only 2,500 of us, there were plenty of seats to choose from. Surprisingly, there was a fair amount of leg room, even enough for 6’5″ Cameron, who usually finds his knees pushed against the seat in front. The seats were also very comfy, much more padding than the ones at Sheffield Motorpoint, so you didn’t get ‘numb bum’ after 10 minutes.

After a quick introduction, we then moved onto some acoustic tests; booing, cheering and clapping on demand so they could get a feel for the sound. There was a video tour around the arena, and then we moved on to the two bands lucky enough to win a Facebook competition to perform at the open day. The band that came first were called The Scandal, although I have to say I preferred the second place band, The Puppeteers.

In between the two bands, they needed to test out the toilet systems, so wanted us to do a ‘grand flush’. Everyone was told to go to the toilet and then when instructed, all flush at the same time. I ended up in a toilet block with about 10 cubicles in it, but we must have been tucked out of the way, because we didn’t get any kind of instruction to flush, and we were stood there like lemons until someone’s husband phoned her up to see where she was. Good job we didn’t actually need the loo though, since they had no toilet roll dispensers installed in those cubicles yet.

The final test was actually a pretty good way of getting us all out of the arena, and it was a test of their emergency systems. A voice came over the tannoy saying something along the lines of ‘There has been an incident, please evacuate the arena’. It all worked very well though, and it was exciting to be one of the first to go inside the arena.

Having said that, we were looking at who we wanted to to see, and our two preferred favourites were Miranda Hart and Cirque de Soleil. But having seen the price, I think we might hold off on that for now., see if we can find any offers for cheap tickets nearer the time. 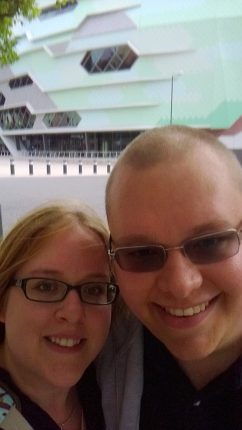